Your cart is empty.
Home
Print 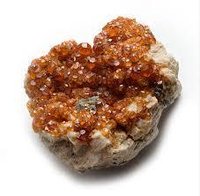 Garnet is a rainbow of gemstones. With the exception of blue, it is found in every color of the spectrum. Garnet has been dubbed the gem of faith, constancy, and truth. Asiatic tribes carved garnets into bullets in the belief that their firey color would inflict more deadly wounds. They were ground into powder for the treatment of fever or jaundice. If the cure didn't work, the apothecary was accused of using an imitation.